Acute coronary syndrome (ACS) is a sudden condition of imbalance between myocardial oxygen demand and supply leading to myocardial ischemic states.1) It is initiated by an atheromatous plaque disruption or erosion. Involvement of lipid, foam cells and smooth muscle could promote a thrombus formation. By this process, it induces ischemic state which can be fatal. Acute coronary syndrome could be classified into unstable angina (UA), non-ST-segment elevation myocardial infarction (NSTEMI), and ST-segment elevation myocardial infarction (STEMI). Additionally, UA and NSTEMI are classified as non-ST-segment elevation acute coronary syndrome (NSTE-ACS). Morbidity and mortality of ACS have increased considerably worldwide. According to the World Health Organization (WHO), in 2016, the estimated number of deaths from cardiovascular diseases was 17.9 million.2) Likewise, in East Asians, cardiovascular death is a major issue and leading cause of death.3)
There are various therapeutic options for prevention of abnormal blood clot development or blockage of blood vessels. The American College of Cardiology and American Heart Association (ACC/AHA) recommend dual antiplatelet therapy (DAPT) as standard of therapy for ACS patients. Dual antiplatelet therapy contains an adenosine diphosphate (ADP) P2Y12 receptor inhibitor and aspirin.4) The P2Y12 receptor antagonists consist of ticlopidine, clopidogrel, prasugrel, ticagrelor, cangrelor and elionogrel.5) Among them, we focused on clopidogrel and ticagrelor.
Clopidogrel and ticagrelor have similar but different pharmacological mechanisms. Clopidogrel is an oral prodrug which irreversibly inhibits P2Y12 receptor, an ADP chemoreceptor on platelet cell membrane.6-7) It is primarily metabolized by CYP2C19 to an active metabolite, and it has somewhat of a slower activity compared to ticagrelor. In Caucasians, the loss-of-function CYP2C19*3 allele presents very rarely (2-5%), but in East Asians, it occurs more frequently at a rate of 13-23%.8-9) Such difference in the occurrence of genetic polymorphism could contribute to the response rate of clopidogrel. On the other hand, ticagrelor is an active moiety and it has faster onset and offset than clopidogrel.10-11)
In a large, global clinical trial, PLATelet inhibition and patient Outcomes (PLATO), it has been shown that ticagrelor significantly reduces cardiovascular related events and all-cause death with a similar rate in major bleeding events compared with clopidogrel.6) However, only 6% of Asians were included in PLATO. Another trial conducted in East Asians, PHILO, observed that event rates of primary efficacy endpoint of composite of myocardial infarction (MI), stroke an d death from vascular causes and primary safety endpoint of time to first occurrence of any major bleeding event in ticagrelor group were not significantly different than clopidogrel group.12) As PHILO was a much smaller study involving only 801 patients, it is necessary to closely examine the efficacy and safety of these two drugs in the East Asian population. In this study, we conducted a meta-analysis to evaluate and compare the efficacy and safety of ticagrelor and clopidogrel based on existing studies on East Asian patients with ACS.

3. Groups and Endpoints
We established two groups: patients treated with clopidogrel and patients treated with ticagrelor. To evaluate the differences of efficacy and safety of two drugs, we determined the composite MI, stroke and CV death as the efficacy endpoint, and major or minor bleeding as safety endpoint. Major bleeding was defined as bleeding that led to clinically significant disability (e.g., intraocular bleeding with permanent vision loss) or bleeding either associated with a drop in the hemoglobin level of at least 3.0 g per deciliter but less than 5.0 g per deciliter or requiring transfusion of 2 to 3 units of red cells. Minor bleeding was defined as any bleeding requiring medical intervention but not meeting the criteria for major bleeding. These endpoints were based on the criteria defined by the PLATO trial.6)
We categorized the studies according to the study design (i.e. randomized controlled trials (RCTs) and non-RCTs (cohort or observation studies). Then, we extracted data from each study, including first author, publication year, information on study subjects (type of ACS, age, race, sex, etc), number of treatment group, drug dose, study design, inclusion criteria, exclusion criteria, and primary efficacy and safety endpoint outcomes.
Using the extracted data, we assessed the risk of biases for RCTs using Revman 5.3 (The Cochrane Collaboration, Copenhagen, Denmark) and the guidance in the Cochrane Handbook, version 5.1.0. For non-RCTs, we estimated the biases according to Newcastle-Ottawa scale (NOS). We allocated the extracted outcomes as dichotomous frequency data. We conducted the meta-analysis based on the pooled odds ratios (OR) and 95% confidence intervals (CIs) in random-effects models. We evaluated heterogeneity among studies by Q test and I2 statistics.

1. Characteristics of included studies
A total of 3,867 studies retrieved by databases (PubMed, EMBASE, and Cochrane Library) were identified. After screening for the titles and abstracts, 2,761 duplicated articles and 2,746 articles that did not meet the inclusion criteria were excluded. Among the available full-text articles, 5 articles were excluded for overlapping and inappropriate data. A total of 10 studies were included in our meta-analysis (Fig. 1).12-21) Among them, 5 studies were RCTs12-16) and rest of the studies were non-RCTs.17-21)
Baseline characteristics of included RCTs and non-RCTs are described in Table 1 and 2. Overall, in RCTs, follow-up period was approximately 12 months with the exception of one RCT which was 6 months. The average age of included patients was in the mid-60s except for one study. Of the 5 non-RCT studies, four were cohort studies. Follow-up periods of non-RCTs were variable from one to 12 months.

2. Risk of bias assessment
In the bias assessment of RCTs, there were 7 categories of bias: random sequence generation (selection bias), allocation concealment (selection bias), blinding of participants and personnel (performance bias), blinding of outcome assessment (detection bias), incomplete outcome data (attrition bias), selective reporting (reporting bias), and other bias. Among RCTs, in the reporting of the allocation concealment, four studies were low risk, whereas one study was considered to have unclear risk. The study had unclear risk in the reporting blinding of participants and the outcome assessment.14) And two studies were considered high risk because of funding from pharmaceutical companies. Otherwise in non-RCTs, there were three categories of bias: selection, comparability, and outcome bias. Among the cohort studies, there were no studies with high risk of bias. 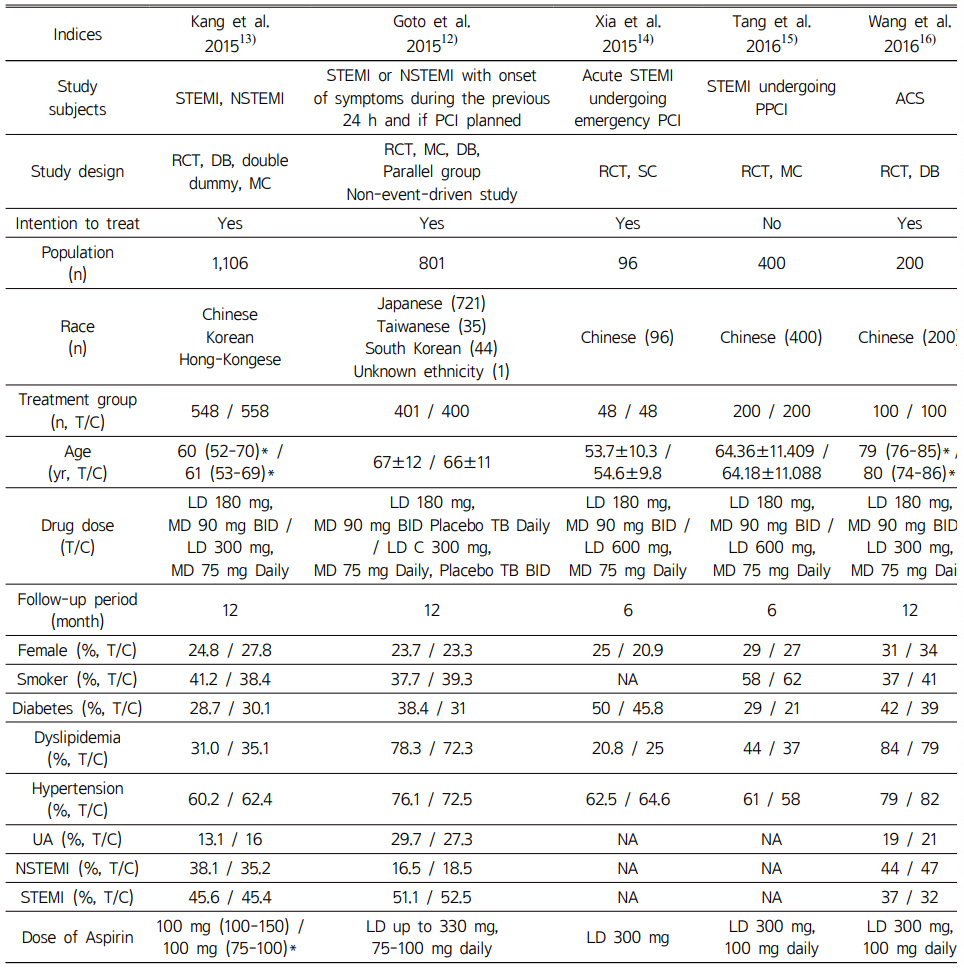 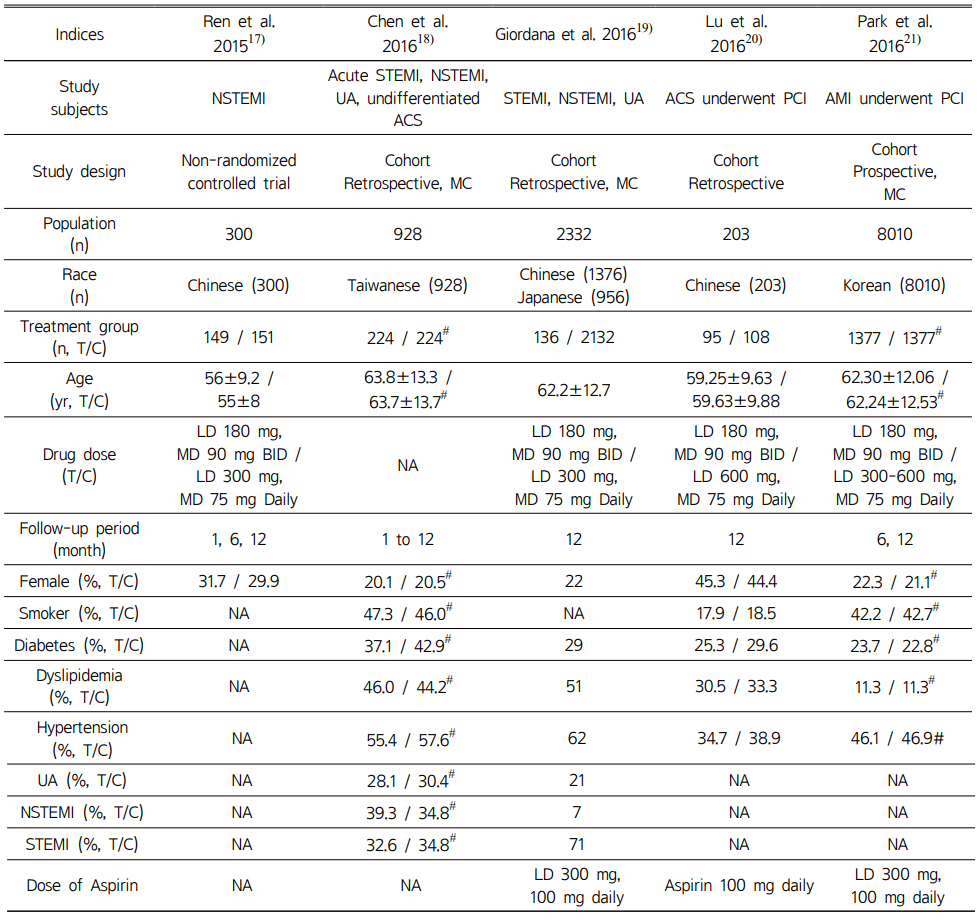 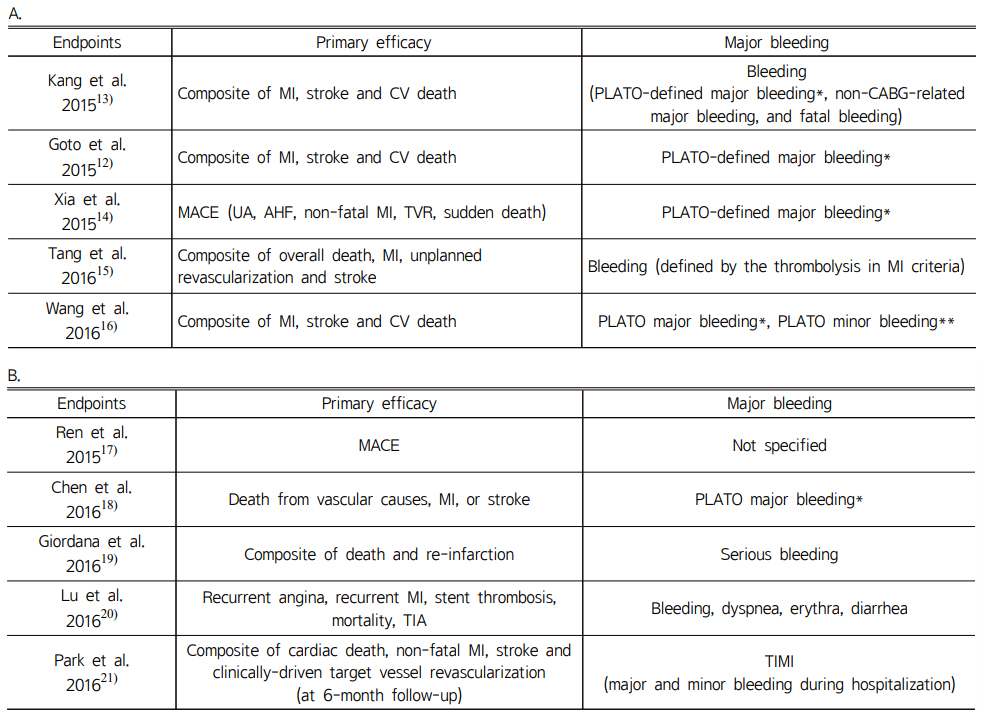 Many randomized trials proved that the use of low dose aspirin helps to reduce the rate of mortality and risk of MI in ACS patients.22) Surprisingly, in CURE trial, adding a P2Y12 inhibitor such as clopidogrel showed significant lower event in the composite of death, MI and stroke, compared with aspirin alone.23) Many trials consistently demonstrated that following PCI, DAPT reduces activation of platelet and ischemic or thrombotic complications.24-26) As such, DAPT has established itself as the standard strategy for ACS patient treatment.
Ticagrelor, which was developed later than clopidogrel, has more potent and consistent antiplatelet effects than clopidogrel, and it acts directly on the P2Y12 receptor without being affected by cytochrome P450 enzymes such as CYP2C19. However, ticagrelor has to be taken twice a day, whereas clopidogrel is only taken once a day, which can be a disadvantage in terms of adherence.
In this study, we evaluated the efficacy and safety of clopidogrel and ticagrelor in patients with ACS through a meta-analysis of RCTs and non-RCTs in East Asian population. When the composite of MI, stroke and CV death as efficacy endpoint was compared, ticagrelor had significantly reduced event rates compared to clopidogrel in East Asians. While no differences were observed in major bleeding, the risk of minor bleeding was increased in ticagrelor compared to clopidogrel in this meta-analysis. The results of our study are similar to the PLATO trial in that ticagrelor had better efficacy outcomes and similar major bleeding rates. In the PLATO trial, the rates of major or minor bleeding was significantly increased in the ticagrelor group (16.1% vs. 14.6%, HR 1.11, 95% CI 1.03-1.20), but rates of major or minor bleeding was not significantly different between ticagrelor and clopidogrel (11.4% vs. 10.9%, HR 1.05, 95% CI 0.96-1.15).6) On the other hand, our study results differ from the PHILO study conducted in East Asians (Japanese, Korean, Taiwanese, etc), where the primary efficacy and safety of ticagrelor and clopidogrel groups were not significantly different (9.0% vs. 6.3%, HR 1.47, 95% CI 0.88-2.44).12) TICAKOREA, another study recently conducted in Koreans with ACS evaluated the bleeding risk between ticagrelor and clopidogrel, found that significantly increased bleeding was observed in the ticagrelor group (11.7%) compared to clopidogrel group (5.3%) at 12 months (HR 2.26, 95% CI 1.34-3.79, p=0.002).27) While not adequately powered to examine the efficacy endpoint, incidence of death from CV causes, MI, or stroke was not significantly different between the ticagrelor and clopidogrel groups (9.2% vs. 5.8%, HR 1.62, 95% CI 0.96-2.74, p=0.07).27) While both PHILO (n=801) and TICAKOREA (n=800) had relatively smaller number of included patients, it is interesting that these studies, which included only East Asians, resulted in a trend towards increased incidence of primary efficacy endpoint in the ticagrelor group, which is the opposite of the findings from PLATO. It is evident that larger RCTs are needed to evaluate the clinical efficacy and safety of ticagrelor compared to clopidogrel in East Asian patients with ACS.
Among RCTs, ticagrelor significantly reduced the incidence of CV related events in two studies, Tang et al.15) and Wang et al.16) Tang et al. suggested that the characteristics of race and older age could affect platelet inhibition of ticagrelor.15) Wang et al.16) and Xia et al.14) designed the trials similarly, but the results were different. While maintenance dose, duration of intervention, and baseline characteristics of included patients were similar, there were differences in the size of the trials and the loading dose of clopidogrel. Such differences are considered to result in inconsistent outcomes between the two studies.
Most of the studies included in the meta-analysis used standard dose of the drugs: 600 mg loading dose of clopidogrel followed 75 mg/day and 180 mg loading dose of ticagrelor followed 90 mg twice a day. But when it comes to recent studies, using half or one quarter dose of ticagrelor presented higher efficacy in Chinese.28) In many previous pharmacodynamic studies, low dose ticagrelor was found to have a larger antiplatelet effects compared to clopidogrel.28-33) Larger size studies evaluating clinical endpoints of the most optimal dose of ticagrelor in East Asian ACS patients are necessary.
Limitation of this meta-analysis is that the number of included articles is insufficient. In addition, the size of studies, including RCT and non-RCT trials, was smaller than that of PLATO trial. In case of non-RCTs, some, but not many studies with relatively large size of patient population was included. If studies of larger scale are conducted in the future, more meaningful results could be analyzed in East Asian patients.